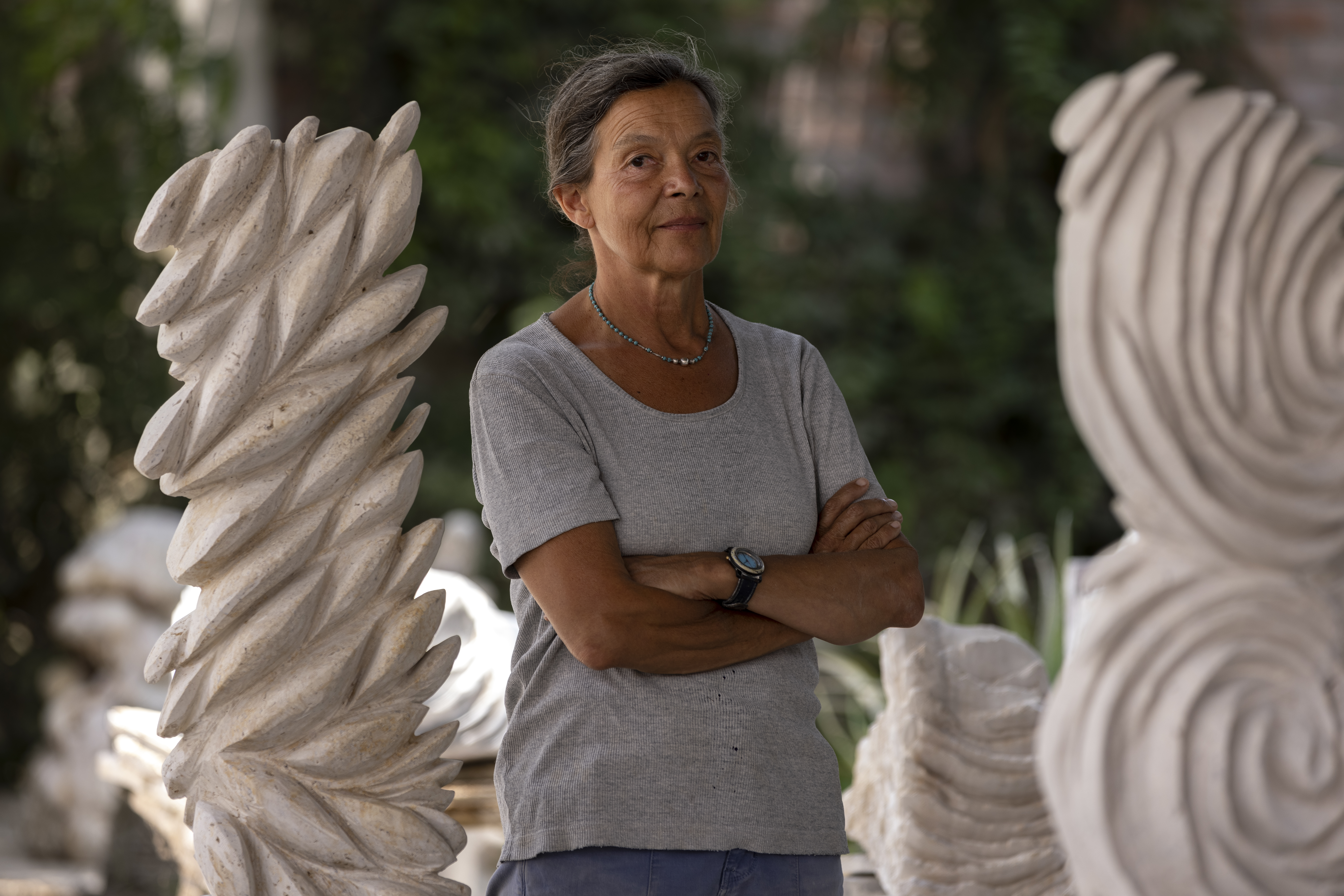 When an artist’s work surpasses words, silent contemplation is imposed. Language – a deceptively rational and structured instrument – is far from deciphering the relationship between Silvia Westphalen and stone, that subtle and delicate world.

Over the last four decades, Westphalen’s work has taken us on a lithic journey through the ages. In an attempt to bring us closer to the mysteries of creation and the origins of the universe, her primitive exploration of stone – powerful, totemic, primal – transcends even those of the inner universe: the primary, umbilical cut that forges unique, fragile beings. Her work – ancestral journey and reverence for the cosmos – flows like a river in its course.

The stone, seemingly implacable, surrenders, revered, listened to, to Westphalen’s caresses. Shy, respectful, fragile, they are both determined and firm, and bring power and fertility into cosmic collision. It is the alchemy between artist and matter. The jungle opens a creative portal for her. An ecosystem is born that defies its primary material dimension and transports it into a fine, interconnected, magical universe. Westphalen listens to what the stones whisper to her, and then sublimates their essences, capturing an imaginary, fragile and beautiful world that, although always within reach, few perceive.

Wounds and cuts heal. The marks of the past blow away like sand in the wind, and the need to understand also dissipates in an essential, intimate exploration of matter. Seeds and impatient sprouts germinate from the old cut. The spiral generates its universe, rich in life. Every single piece is born. Every vein and tone of the rock is transformed into warmth and gentleness, into the caress of the wind that polishes the deepest marks. Then a sublime reality emerges, a planet where flora and fauna, harmonious, mystical, subtly interconnected, coexist. Eclosion and fountain, golden light and cosmic dust, gush forth like spring water. Silvia Westphalen’s Selva (Jungle) is pure spontaneity. In the exploration of the hidden essence of the stone, fleshy and graceful life forms make their appearance in the gentle movement of the breeze.

The contrast with artificial reality seems to be absolute. However, a distant yet familiar sensation recalls one’s own forgotten sensibility. Like a flock of Amazonian birds – dozens of species that move together at different heights in the forest to warn each other of dangers – Selva (Jungle) opens eyes to warn hearts of the distancing from their essence and origin.

A re-exploration in search of harmony with the whole, an ode to diversity, this exhibition is a reminder of the inexhaustible source of learning, inspiration and richness that lies in the uniqueness of each being, which can only exist in delicacy, peace and respect. Thus, Westphalen disappears in her gesture, a mimetic, cosmic messenger, part of the ecosystem, a tortoise that moves stealthily through the undergrowth, expressing ancestral wisdom. There is no more room for ego, no more room for the marks of man; pure curiosity, sensuality, fertility; interconnectedness between life forms, fragile, light, warm, succulent, perfect; early morning dews and songs of the wise toad at the foot of the tree of life.

Selva, symbiotic beauty that impacts, privileged food for the eyes and the soul, brings the secret message of the forest, a song of peace and love for nature and all its creatures. A stony melody that invites us to learn to live together in harmony, appreciating every moment of the exceptionally gentle planet that welcomes us, before it is too late.

The work of Silvia Westphalen, a well-known Peruvian artist, stands out above all for her stone sculptures and drawings. Between 1963 and 1992 she lived successively in Lima, Rome, Mexico City, and in the cities of Lisbon, Lagos and Évora in Portugal. She attended the Centro de Arte e Comunicação Visual de Lisboa (Ar.Co) for three years and, in 1982, she took the course of Plastic Experiences at the Sociedade Nacional de Belas Artes de Lisboa. From 1983 to 1986 she worked under the guidance of the sculptor João Cutileiro, and that last year she participated in the II Sculpture Symposium in Durbach, Germany. Between 1986 and 1992 she headed the Stone Sculpture Department of the Cultural Centre of Évora, Portugal. In 1989 she received the First Prize for Sculpture from the Culture and Development Programme of the Portuguese Club of Arts and Ideas. In 1991 she was invited by the Cultural Institute of Macao, China, to lead a marble sculpture workshop. She has collaborated in stage productions at the Centro Dramático de Évora and, in 1992, she obtained a scholarship from the Calouste Gulbenkian Foundation for a stage design course in Paris. In 1993 she returned to Peru, where she currently lives. Since 2007 she has been travelling the Peruvian Amazon.
Westphalen is the winning artist of the I National Biennal (Lima) 1998. In 2011, she was awarded a residency at the Vermont Studio Center and, in 2013, she was invited as a guest lecturer at the Pratt Institute in New York.
She has participated in numerous solo and group exhibitions in the cities of Lisbon, Porto, Coimbra, Frankfurt, Madrid, Rio de Janeiro, Santiago de Chile, Lima, Arequipa, and New York. In Lima, she has created a mural sculpture for the chapel of the parish of Nuestra Señora de la Reconciliación, in Urbanización Camacho (La Molina), Lima, and she has executed, in 2018, a large mural for the hall of the Primera Visión business building in the district of San Isidro, Lima.
Among her most recent exhibitions in Lima are her anthological exhibition “Las edades de la piedra”, at the ICPNA in Miraflores, (2017); “Suculentas”, at the Fórum gallery (2019); “De Voz a Voz”, “Negar el desierto”, at the Museum of Contemporary Art-MAC (2021) and “Selva”, at the Inca Garcilaso Cultural Centre of the Peruvian Ministry of Foreign Affairs (2022).