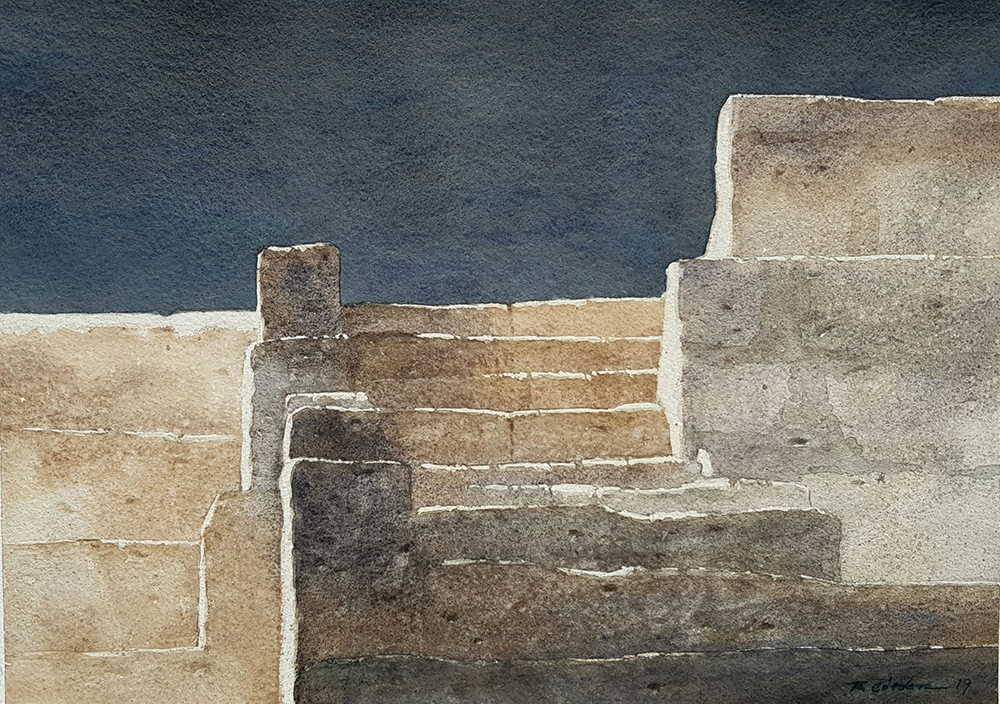 (Built with the volcanic rock known as ashlar, the buildings in the historic centre of Arequipa are representative of the fusion of European and indigenous construction techniques, embodied in the admirable work of the Spanish architects and master builders and the Creole and indigenous masons. This fusion is evident in the robust walls of the buildings with arcades and vaults, the courtyards and open spaces, and the complex baroque decoration of the façades).

The importance of sillar (ashlar) in the definition of the uniqueness of architecture of Arequipa, which in turn is, dialectically, the product and cause of the very identity of the city and its inhabitants, is unquestionable. One of the most illustrious sons of Arequipa, José Luis Bustamante y Rivero, said it in a more beautifully and precise way: “Pétrea ciudad adusta. Sólida trabazón de viviendas donde el sillar es símbolo de la psicología colectiva: roca y espuma; dureza y ductilidad. Amalgama de fuego, en que el aliento del volcán funde y anima las piedras y las almas”. (Stony, adusta city. Solid housing latch where ashlar is a symbol of collective psychology: rock and foam; hardness and ductility. An amalgam of fire, where the breath of the volcano melts and animates stones and souls).

The ashlar is, then, frozen fire. And, by one of those spells that explain the balance of the universe, the element that best describes it is water. From the watercolours.

The watercolour was not born in Arequipa, but no one would have been surprised if it did. A discipline made of light and geometry finds the ideal context to develop in the White City, where two brushstrokes can create a monument.

When you are sitting on a bench in the Plaza de Armas, in broad daylight, the force of the sun forces you to squint. Now, squinting gives a sharper look.  Volumes and chiaroscuro acquire definition, weight and contours.  Reality is clearer. This means that the concepts become clearer. This is why mathematicians and scientists of the highest calibre have flourished in the city, as well as brilliant jurists and writers. And photographers and caricaturists. And watercolourists.

Ricardo Córdova (Arequipa, 1961), since he began his early artistic career with an exhibition in the atrium of the church of Yanahuara in 1973, has won everything that could be won in competitions, with a predilection for watercolour. His talent has certainly not been limited to expressing himself in this technique, and it is very likely that his production in oils and acrylics is more important in quantity and no less valuable in quality. In this exhibition, in any case, the excellence of his art is displayed in watercolour, that discipline of light, emptiness and immediacy.

What is the factor that best defines his talents as an artist? Perhaps the sense of composition; that wise way of arranging volumes and perspectives, even of the most banal or basic materials – a calamine shed, a ruin, an extensive quarry – to create the impression of harmony that dominates the horizon and gives the sensation that any other element is superfluous in the painting. From there to abstraction, there is only one-step, that sneakily crosses from time to time profiling its ashlars of lava and water against the sky.

Through Ricardo Córdova, the Centro Cultural Inca Garcilaso pays homage to the artists and artisans who built and rebuilt Arequipa throughout almost half a millennium, using ashlar for the walls, eye for the geometry and spirit as an amalgam.

He began his painting studies at the age of 12, with Julio César Morales, who was also the master of the watercolourist Vinatea Reinoso. A year later, at the early age of thirteen, he made his first individual sample. At the same time he studied ceramics, graduating from the Centro de Capacitación Artesanal Mixto de Arequipa in 1976.

In addition to his work as an artist, from a very young age he has taught in different institutions. He entered as an assistant professor at the Escuela de Artes de la Universidad Nacional de San Agustín, (School of Arts of the National University of San Agustín) in 1991, where he currently serves as a senior lecturer and postgraduate professor.

He has made about 30 individual and several collective exhibitions, which have taken his work to Colombia, Chile, Ecuador, Germany, the United States, France and China. Since 1980, his work has earned several awards for painting, such as the Michell, in oil and watercolour; the prizes of the Peruvian-North American Institute, in watercolour; John Constable, of the Peruvian-British, Young Artists, among others. He has participated in numerous biennials and art fairs such as PARC- MAC Lima (2013 and 2014); Arteaméricas – The Latin American Art Fair, La Galería, Miami (from 2006 to 2010) and Shanghai Art Fair, Latin American Pavillion (LAP), China (2008).