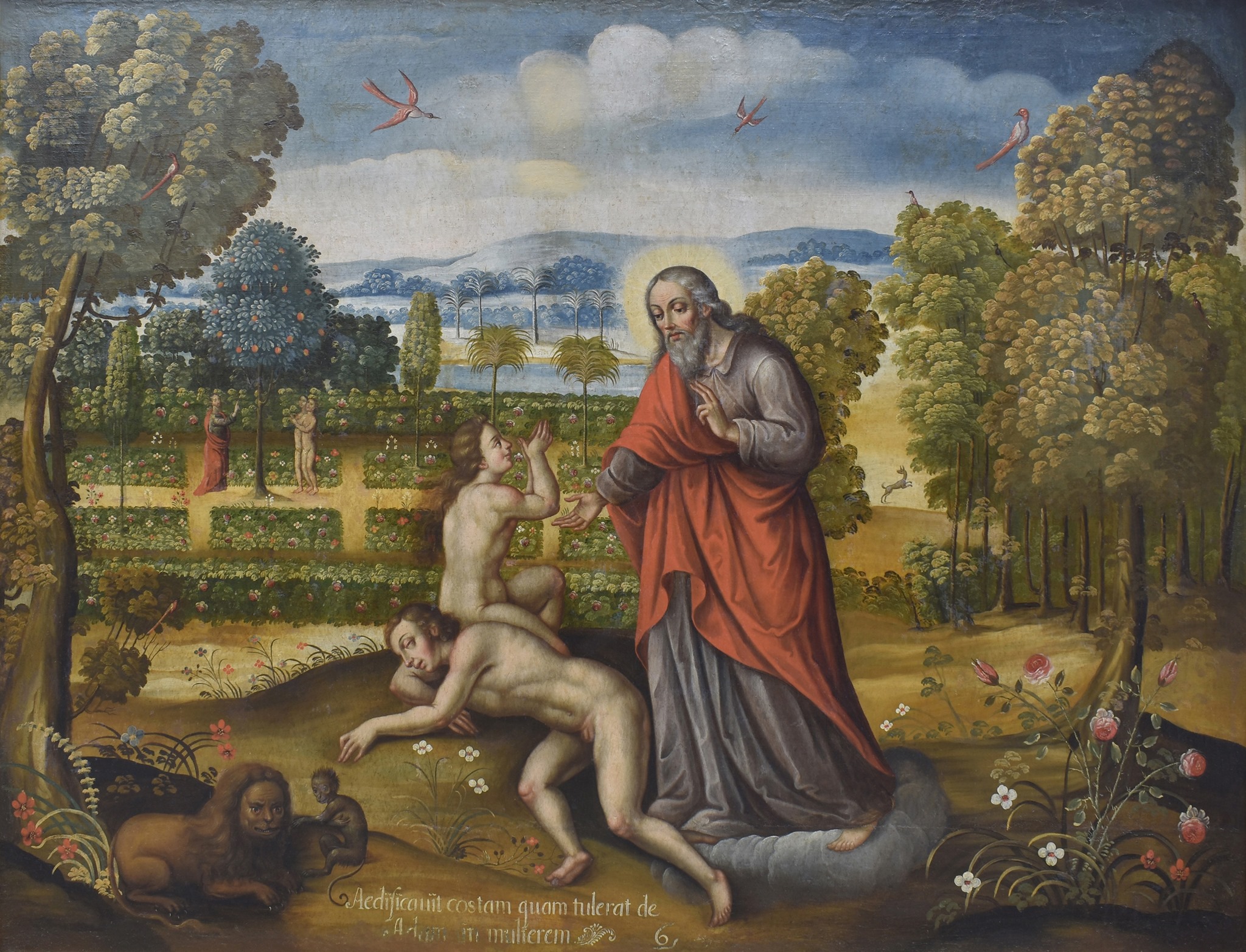 Text adapted from “The Genesis of Hualahoyo” by Luis Eduardo Wuffarden

Until a few decades ago, on the walls of the chapel of the Virgen del Rosario in Hualahoyo -a small town in the central highlands of Peru, on the outskirts of Huancayo-, an exceptional collection of Cuzco paintings could be seen: twenty scenes from the first book of the Bible, covering the creation of the world and the origins of humanity. Both the rarity of those subjects and the remarkable quality of their workmanship made the Genesis of Hualahoyo one of the most remarkable and at the same time least known, series in the history of Andean painting.

Throughout the 1990s, successive robberies caused the twenty works -together with a single piece of similar origin- to gradually disappear from Hualahoyo. Several years later, the determined action of the Peruvian Ministry of Foreign Affairs, as well as of several other state agencies, made it possible for seven of them to return to the country, after their sale on the international market was prevented. Among those paintings was La creación de Eva (The creation of Eve).

As in many other cases, the history of these canvases and the circumstances of their commissioning remain unknown. It has not been possible to determine how or when they arrived in Hualahoyo. Its style, in fact, corresponds to a master -or workshop- active during the last quarter of the 17th century, when the pictorial traditions of the Andean south reached a moment of consolidation and boom. In harmony with the aesthetic expectations of their own environment, the Andean painters did not limit themselves to replicating the formulas of the Flemish Baroque, but succeeded in rethinking them for a local audience. This is the case of Diego Quispe Tito, an indigenous master who was one of the initiators of the appreciated genre of «paisajes sacralizados» (“sacred landscapes”). Precisely for this reason, the historian Francisco Stastny would not hesitate to attribute Genesis of Hualahoyo to a close follower of Quispe, surely in collaboration with other artists.

The graphic models of Genesis come from a series of prints signed by the Flemish master Johann or Jan Wierix (around 1549-1620), which can be dated to the beginning of the 17th century. Its original formats, rather brief and vertically organized, were significantly transformed by the Andean painter by developing the same themes on landscape canvases, allowing him to place each scene in the midst of vast fantasy scenarios. Another interesting aspect is the effort demonstrated by the local artist to represent the naked human body, a very rare motif in the painting of the vice royalty. To compose The creation of Eve, Wierix may have been remotely inspired by the prestigious Michaelangelo model painted on the vault of the Sistine Chapel. This is suggested by the basic distribution of the figures, although the gesture of God the Father, blessing the first woman next to sleeping Adam, would correspond to a sensitivity more akin to counter-reformist devotion.  The inclusion of a lion and a monkey in the foreground could allude to the evils and temptations that stalked the primordial couple. This interpretation would be confirmed by the scene before the original sin that is glimpsed in the background, in which the Eternal Father shows Adam and Eve the tree of good and evil, while he warns them of the dangers of eating its forbidden fruit. However, without a doubt, one of the most attractive elements of this painting is its enveloping paradisiacal atmosphere, achieved through the vast panorama that sets the story in motion.