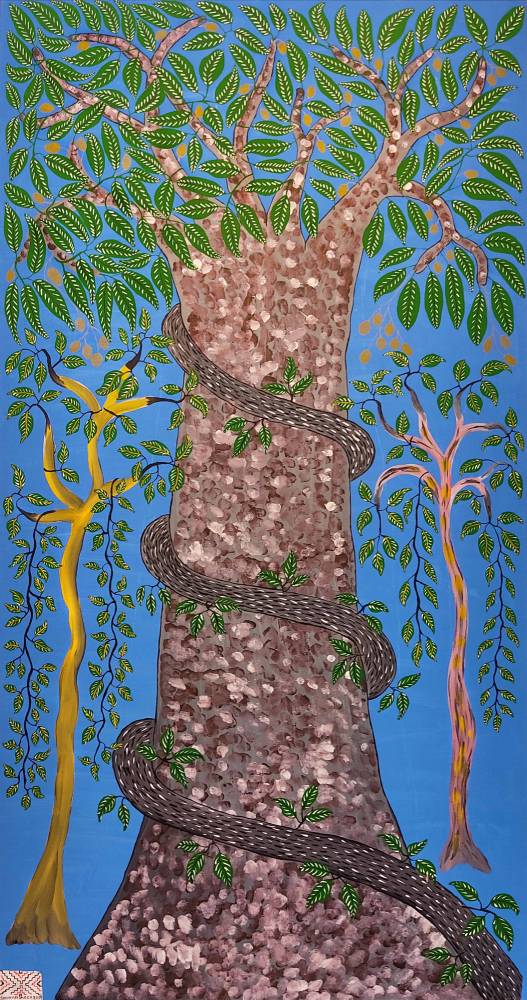 Roldán Pinedo was born in San Francisco, a community of the Shipibo people, near Pucallpa. From his shaman grandfather he inherited the same name: Shoyan Shëca, ‘Restless Mouse’. The son of a bilingual schoolteacher and a potter, he now lives in Cantagallo, the settlement where the vast majority of Shipibos people are concentrated in Lima. He fight, along with other artists and craftsmen, to make it his own place. “Acá es diferente que en mi comunidad. En la tarde no se escucha a los pajaritos que cantan, ni en la mañanita el ruido de los monos: shon, shon. El ruido de acá son los autos, los silbatos, ya no se escuchan los ríos que suenan. Esa es la diferencia más importante para mí y extraño siempre. Mi mundo es allá, siempre me da esperanza recordar. Cuando dibujo me concentro y parece que estuviera en la selva, en un mundo nuestro” (“It’s different here than in my community. In the afternoon you do not hear the birds singing, nor in the morning the noise of the monkeys: shon, shon. The noise here is the cars, the whistles; you do not hear the rivers sounding anymore. That is the most important difference for me and I always miss it. My world is over there, it always gives me hope to remember. When I draw I concentrate and it seems like I am in the jungle, in our world”).

He arrived in the capital in 1977 with three little sacks of plant bark with which he prepared “para-para” and “siete raíces” (“seven roots”) to survive. It was then that he met the historian Pablo Macera. “Vas a pintar puritos animales, me dijo” (You are going to paint little animals), he told me. Macera invited him and Bawan Jisbë – his first wife – to participate in the project Pintura y palabra (Painting and Word project) to portray and record the fauna of their communities. They experimented with coloured earth and natural dyes, on tocuyo fabrics dyed with mahogany bark, a special clay (manú) and sometimes with annatto and curry or curcuma. They had to go to the mouth of the Pisqui River, five days from Pucallpa, by bus and peque-peque. A dangerous adventure in those years, as it was an area with little contact with outsiders. Until then, their life had been spent between Lima and Pucallpa. The paintings were exhibited for the first time at the Museo de Arte del Centro Cultural San Marcos (1999). This show marked the beginning of several exhibitions, using the same technique, in some of which I participated as curator. In his early years, the painter concentrated on documenting not only the fauna but also the customs of the Shipibo people, dealing with themes such as healing through the ayahuasca ceremony, paiche fishing, hunting, and the gathering of taricaya eggs, framed by a landscape where each leaf of the foliage was painted with special care. Later, he began to incorporate more themes, such as visions, myths and stories, in large format fabrics. He soon managed to position himself in the art scene and was invited to exhibit his work in Europe and North America.

He gradually abandons traditional materials and uses acrylic, which is more readily available and offers him greater freedom. He uses white backgrounds and his colours become vibrant. With energetic strokes and a more defined style, he draws the characters he is passionate about: shamans, mermaids, fish, birds, otorongos, caimans, boas, constellations and all that the Amazonian space holds. He opts for a composition with one or two figures in large format, which allows him greater expressive force, focusing on the essential. His intuitive handling of composition and the original recreation of his world place him in a contemporary perspective. He recently participated in Amazonías, at Matadero Madrid.

In this exhibition, he explores what he knows very closely: the trees of the Amazon rainforest. He travelled from Pucallpa to Dos de Mayo, a community with a forest that the artist considers almost virgin. There, for three months, he painted 40 species of trees – a work entrusted to him by the collector Armando Andrade – 25 of which have been exhibited here. “Cuando hice estas pinturas sentí mucha nostalgia de las cosas que pasé durante mi niñez, en mi comunidad, San Francisco de Yarinacocha. Me iba a bañar a la cocha y me gustaba subir a los árboles, llegar a la rama más alta y saltar compitiendo con los niños de mi edad. Me gustaba acompañar a mi abuelo a pescar, rodeado de muchos árboles, en época de creciente. Aprovechaba en coger los frutos del shimbillo, comérmelos y traer un poco para mi mamá, que a ella también le gustaban. Eso quedó grabado en mi memoria hasta el día de hoy. Por eso, cuando pinto los árboles lo hago sabiendo que mis pinturas tienen mucho poder y energía de la Naturaleza. El arte para mí es una pasión que nace en mí en cada trabajo que realizo, y es un don que Dios me ha dado” (When I made these paintings I was very nostalgic for the things I spent during my childhood in my community, San Francisco de Yarinacocha. I was going to bathe in the cocha (artificial lakes) and I liked to climb trees, reach the highest branch and jump, competing with children my age. I liked to accompany my grandfather to fish, surrounded by many trees, during the crescent season. I would take the opportunity to pick the fruits of the shimbillo, eat them and bring some back for my mom, who also liked them. That was etched in my memory to this day. Therefore, when I paint trees I do it knowing that my paintings have a lot of power and energy from Nature. Art for me is a passion that is born in me in every work I do, and it is a gift that God has given me).

A self-taught painter, Roldán Pinedo or Shoyan Shëca (his Shipibo name) began in the trade, in 1997, with the historian Pablo Macera, in the project “Pintura y palabra” (Painting and word), together with the painter Bawan Jisbë. (Elena Valera). Since then he has continued to paint themes related to the Shipibo culture, to which she belongs, managing to position herself in the local art scene.

He has participated in numerous collective exhibitions, including “Amazonías” (Matadero-Madrid), in several countries, such as Denmark, Ecuador, Brazil, France, United States, Ireland, Japan, among others.

His work is part of the permanent collection of the Banco Central de Reserva (Central Reserve Bank) and the Ministry of Foreign Affairs of Peru.