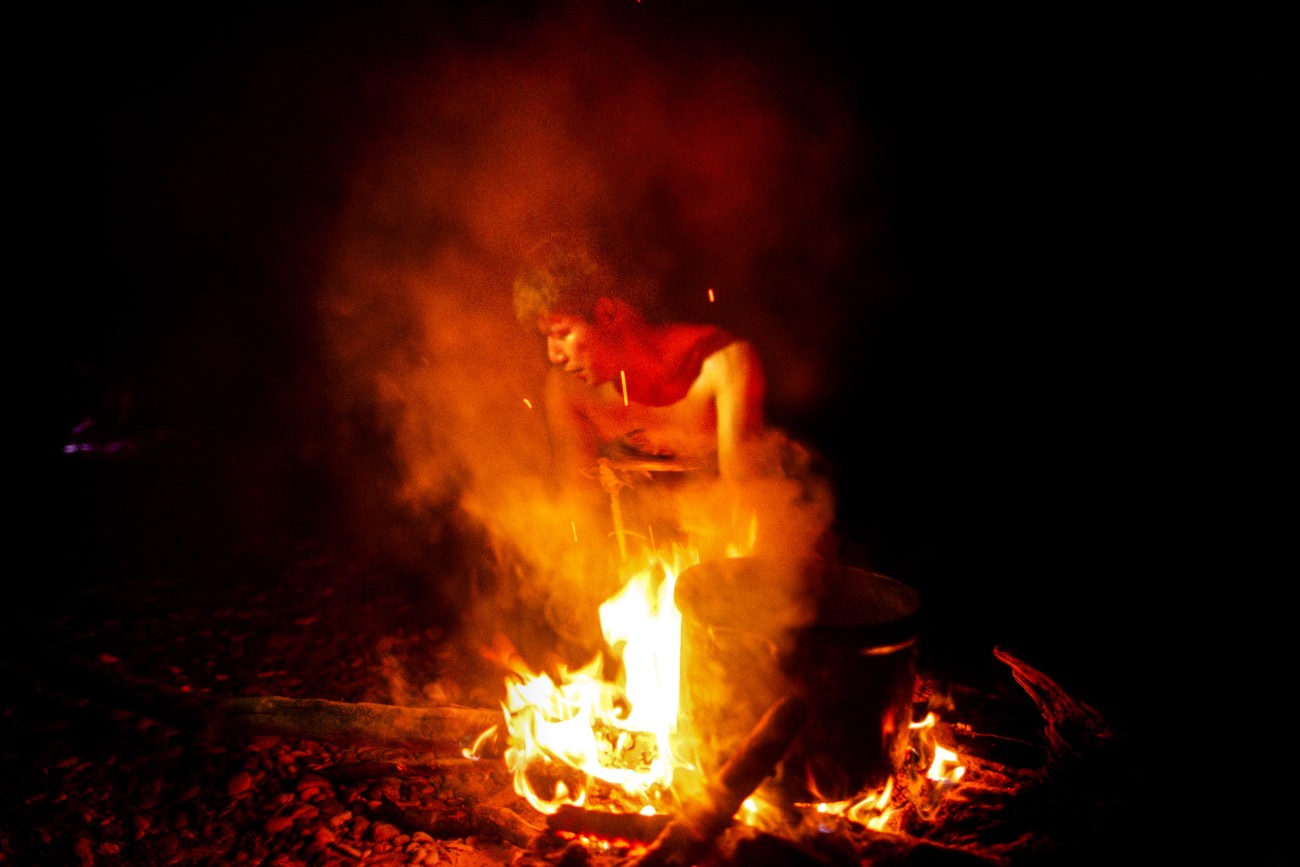 There is something apparently contradictory in these photographs, a fact that disturbs and seduces at the same time, a trait that gives them a strange and hypnotic power. Because, instead of seeking clarity, their authors have wanted to embark themselves in the realm of shadows, as if they wanted to undertake a journey back to the origins, to that state of affairs in which darkness prevailed and just enough shreds of light crept in to make sense to the world.

This option fits perfectly with the character of his proposal: to observe in their own habitat beings that coexist closely with nature and whose atavistic ties we barely senses from our Western point of view. However, the peculiarities of its record, of its unique way of capturing men, animals and landscapes, transcend what we could call anthropological documentary photography. Certainly, they have managed to penetrate that hidden dimension that usually escapes those who use their cameras for scientific purposes. It is amazing how far they have gone in this field. On a good note, they have endeavoured to blend in with the communities they have portrayed, to the point that they have bordered on the impossible: adopting their gaze, giving us the feeling that, even fleetingly, they have glimpsed those arcane that are the cipher of their existence.

If capturing reality is an ephemeral pretension, these photographs suggest that there is another reality, even more unassailable, one where there are ancestral truths exists that can only be accessed through magical rituals. Hence the mysterious aura of these images where nothing is what it seems, or rather, where everything is possible. Yes, there is something magical in these pieces of shadow slightly wounded by light, in these chameleonic figures that metamorphose before our eyes, thanks to the very subtle vision of Nolte and Searles.

Dealing with the gloom, forcing the readability of the image, carries risks that only photographers with a remarkable mastery of their craft and an exquisite sensitivity are able to face. In this case, the coincidence between aesthetic aspirations and the management of technical resources is admirable. Moreover, these photographs are disturbing because they are not satisfied with contemplation. Rather, they betray the desire to explore unsuspected territories, the need to transfigure reality. The visual compositions stand out for the creation of evanescent atmospheres that transport us to a dreamlike environment, to a place of the soul where a timeless clamour resounds. They stand on that frontier where the human experience succumbs to the splendour of the sacred.

Musuk Nolte and Leslie Searles have managed to glimpse an intimate and secret fire, one that only shines in the deepest darkness. After all, photography is the art of revelation.

He studied professional photography and a specialization in contemporary photography at the Centro de la Imagen in Lima (Image Center of Lima). His work evolves between documentary photography, art and publishing, focusing on issues of diversity, native cultures and human rights.

He was a fellow of FONCA Mexico (2010), of the World Press Photo Master Class in Latin America (2015) and the Magnum Foundation (2017). He has received the Tenth National Award for Documentary Photography “Eugene Courret” (2010) and the Elliott Erwitt Havana Club 7 Fellowship (2017).

He is editor of KWY Ediciones, an independent publishing platform focused on publishing and joint training of projects by mainly Latin American authors. He is currently part of the explorer system of the National Geographic Society and of the academic committee of Master of Documentary Photography of the Image Center.

Leslie Searles has a Media degree with a specialization in film from the Universidad de Lima, and a Photography degree from the London College of Communication. She attended courses at the Gerrit Rietveld Academy in Amsterdam and the International Center of Photography in New York.

She received a scholarship to attend Reflexions Masterclass, a photography seminar led by Giorgia Fiorio and Gabriel Bauret, in 2006.  Between 2009 and 2013, she was part of the photography team of the newspaper El Comercio in Lima.

The images of this exhibition have been published in the book PIRUW (2014), edited by Mario Testino. She has won the Jury Award in the Poy Latam – Best Book (2015) and Best Multimedia Report (2017) categories, respectively.