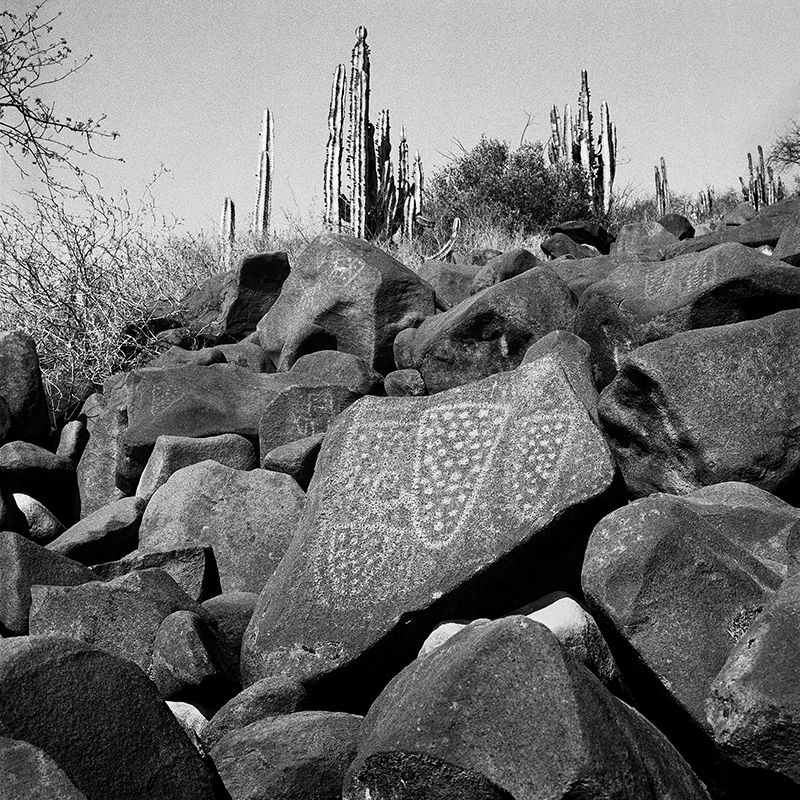 THE NORTH OF BILLY HARE

When Billy Hare arrived in Lambayeque in the late 1980s, the author of these lines was somewhere in that valley. He arrived, he told me, with the intention of keeping a photographic record of the huacas in the region. He was traveling in a Land Rover, in order to get into the paths and get away from the asphalt road to which many people reduce that department. He carried enough books in his backpack, among them a large-format one that inventoried in geographical maps the pre-Columbian sites deployed in these lands. Hare took time writing those pages, contemplating the vertiginous constellation of vestiges of adobe that now ran from the seashore (Morro de Eten) to the uninhabited Olmos and the Quechua cornice of the territory, in the limits with Piura, Cajamarca and La Libertad.

In Lambayeque the traces of ancient pilgrimage routes are still perceptible, and its inhabitants still feel devotion and reverential care towards mountains and huacas that, isolated or as part of sanctuaries, citadels or fortifications, are considered as genuine deposits of emotional and spiritual influences. We do not all know how to distinguish, in something that time has reduced to the condition of a mound, the soul of a place, the rules that once presided over its orientation in space, or its function. In that field, on the other hand, Billy Hare was like a fish in water. “Everything is alive on earth, even the hills and the stones”, he said in some interview. “It is just that things are at a rhythm, at a frequency of movement so slow, that it is absolutely imperceptible to men”. In his discipline, the acquisition of the most refined formal technique was always governed by a focus on intellectual order; and both orders in him have become parallel. The photographs we now see testify to certain monuments and petroglyphs in their current
circumstance of ruins; they also provoke seeing them, as one turns the pages of a book, before the carob forests that surrounded them were cut down and the pyramids, terraces and ramps lost their original colors. That, in accordance with the ancient tradition of the area: as in a dream. These images reveal the changes that cataclysms and men have left in the shape of the earth over the centuries. They are images of the present time.
From the large number of panels (many of them aerial) that he made then in Lambayeque, the author has rescued the ones that conform this original exhibition in the Inca Garcilaso Cultural Center of the Ministry of Foreign Affairs. By exhibiting them now, after having presented Variables continuas (2008), Nazca, la noche (2014) and Algo ahí (2016), Billy Hare reveals the sense of simultaneity with which his work encompasses. And the clear intuition that has guided him through his mutations, where the symbolic language, the artisan touch, and the aura of the great works of art that radiate all his works have remained constant.

A disciple of Minor White and Aaron Siskind, between 1977 and 1978 he attended the Master’s program at the Rhode Island School of Design (RISD) as a Fulbright Scholar. In 1992 he was distinguished with the John Simon Guggenheim Foundation Fellowship.

He was a founding member of the Sequence Association (1976-1980), as of Sequence Photo Gallery. He also participated in the founding of the Department of Photography of the Gaudi Institute (1993), the Center for Photography (1999) and the photo-gallery El Ojo Ajeno (2000). He has taught at the Pontifical Catholic University of Peru (PUCP), the University of Lima and the University of Applied Sciences (UPC). As a parallel activity to his creative and teaching work, Hare has collaborated in various editorial projects around the landscape and cultures of Peru.

In 1997 the Fundación Telefónica del Perú organized a retrospective of his work, publishing the Billy Hare Photographs catalog. His work is part of the Lima Art Museum (MALI) and of public and private collections in Peru and abroad.

In the last decade he has individually and collectively exhibited the series “Continuous Variables” and “Nazca, la noche”. He has published “Something there”, a photo-book edited by KWY in Spain. He has participated in various international fairs such as The Armory Show in New York (2012), as well as recently in the Pioneros section of Art Lima (2016) and ArteBA (2017).