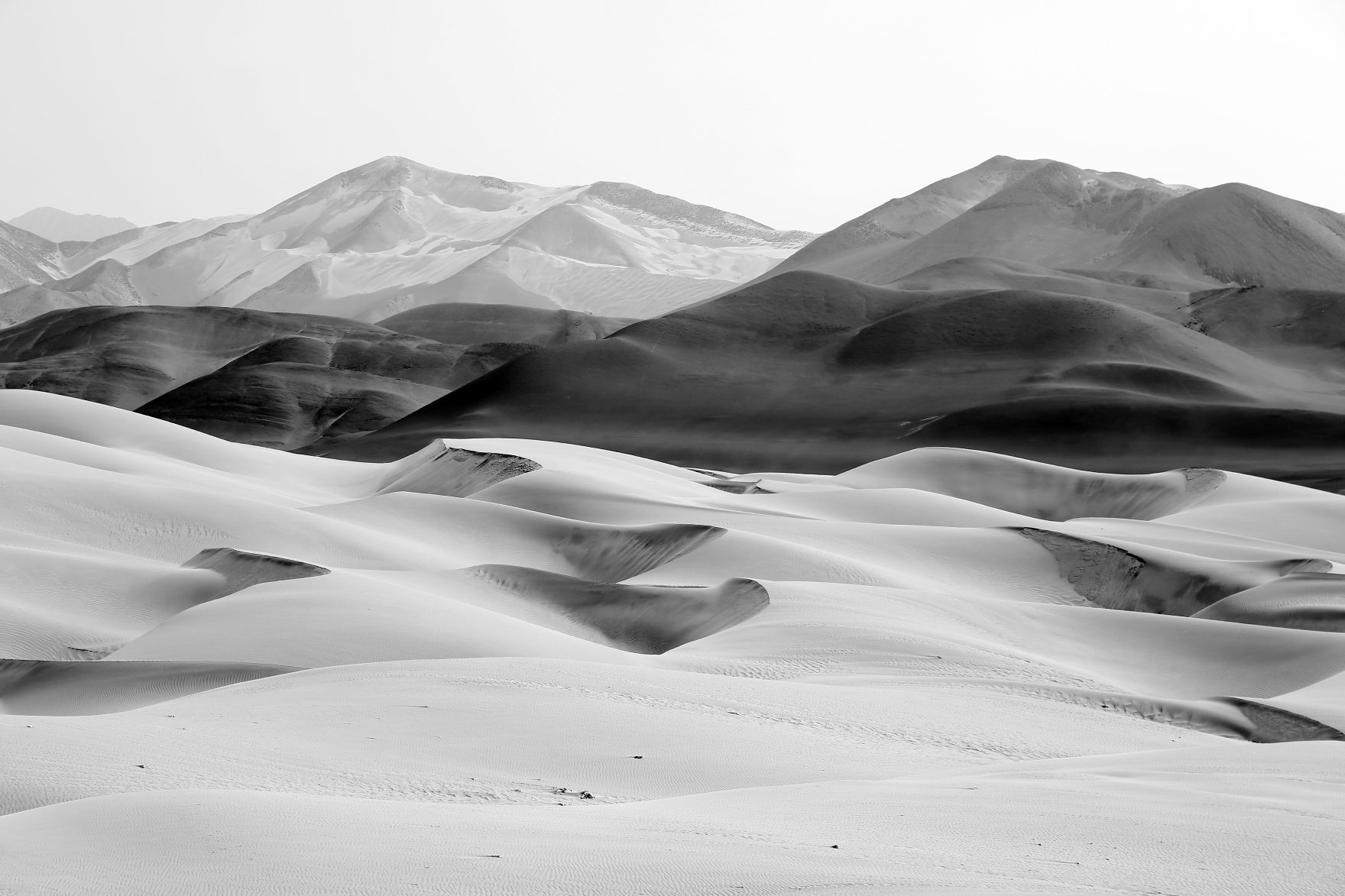 (And it is that the nature, by the feelings that in me I awakened, seemed to me the most opposite thing to the mechanical productions of men. The less marked it was by man’s hand, the more space it offered to the expansion of my heart.).

The landscape of the Peruvian coast began to settle into the imagination and practice of our artists relatively few decades ago, when it burst in as the protagonist and subject of the search for a collective identity buried by aesthetic ideals that had little to do with the treeless and hostile sands. The desert was a non-place, where nothing grew and nobody cared. Until a few archaeologists began to unearth its treasures, the past to illuminate the present and its scenery to infiltrate the dreams and imagination of painters, photographers, filmmakers, poets and essayists. This legion rediscovers the particular, naked beauty of distances and solitudes modelled by the lights and mists of the barren strip between the hills and the sea. Nothing gathers subtleties that ignite the contemplative spirit, as the ancients knew well. To represent it today means to be sensitively and symbolically anchored to a territory, to restore to it the protagonist that was held in the past, when it inspired the reverent, intensely loving relationship between man and Pachamama.

These photographic works by Álex Bryce have portrayed the coastal desert of Peru for more than two decades. Since then, he remembers the words that Juan de Arona joined to define the region: “Una franja de arena que se aferra a los Andes para no caerse al mar” (A strip of sand that clings to the Andes so as not to fall into the sea). The void is his theme, and on this, he has focused a patient exploration, silent as his theatre of operations. He has devoted himself to the portrait of these elusive spaces, smoothed by the winds, rough, suspended in time, intact. From these endless planks, from the apparently monochrome, discoloured and mute amphitheatres that mediate between the urban and bustling conglomerates: this is where these magnificent images come from that are now on display for the first time today.

The photographic exercise enabled Bryce to revisit the impressions of his childhood trips to Arequipa, to continue and expand them in the positions where he has set up his tripod. He does not improvise, nor does he rush. Their displacements pursue a single choice, that of the point of view that gives the internalised essence of this pure exteriority. His walks go to meet of the components of surprise: geometric figures, superimposed planes, sinuous mantles of undulating dunes, sediments that reveal geological magnitudes, seas of white dunes stopped at the foot of buttresses crumpled by immemorial deluges, open and veiled skies of all thickness, textures of the ground, and minimal traces of walkers of the past.

It is probably in its riverside landscapes where the astonished gaze of the child reconstructs with greater clarity the enormities open before his eyes. The abysses of the road unveil grandiose successions, dissolved by the distance while a solitary wave stands still. Subtracted from time, the tangible features of the place – an anodyne curve, a detour between the tracks, an unnamed beach – are transferred to the rectangle of paper. There they are set as respectful translations of the territory and as constructive elements of a personal gaze, imbued with the magic of black ink and its tones. These panoramas of absences reconfigured by the artist/interpreter exalt the most humble and primordial prodigies: a visuality – paradoxically inexhaustible – with no other objects than earth, water and air. Contemporary masters such as Billy Hare now see their explorations have permeated the next generation of photographers. Drawers, potters, weavers, mystics and ancient pilgrims come alive sharing their soil with an artist like Álex Bryce, whose output shines brightly as a gift to the lenses and minds of the future.

Bryce has integrated the first promotion of photography at the Gaudí Institute between 1993 and 1996, a school recently created by photographers Billy Hare, Antonio Ramos and Roberto Huarcaya, which would later become the Center of the Image.

He has obtained the first and second place, at national level, in the First Photography Contest, organised by the Fundación Telefónica (Telefónica Foundation). He has participated in collective exhibitions at the Municipality of Miraflores and Lucía de la Puente gallery, among others, as well as in the Biennial of Photography 2014. Actually, Álex Bryce is a photographer with little exposure in the circle of art and gallery. His personal work has been constant but silent, taking him in parallel to his commercial or “sobrevivencia” (survival) work, as he calls it. He started in the early 90’s, with more than 25 years in the field, doing campaigns and commissioned work for different institutions, advertising and tourism agencies, design studios and other clients, having published in different national and foreign magazines.

He has collaborated in various editorial projects related to archaeology, architecture and other subjects, the las of them: “Perú la despensa del mundo” (Peru, the pantry of the world), has been awarded internationally as the best in the category “libro Gourmand” (‘Gourmand book’).

After his first solo exhibition at the Obsidiana gallery (1995) – curated by Jorge Villacorta – on posters and political propaganda, this is his first major solo show.