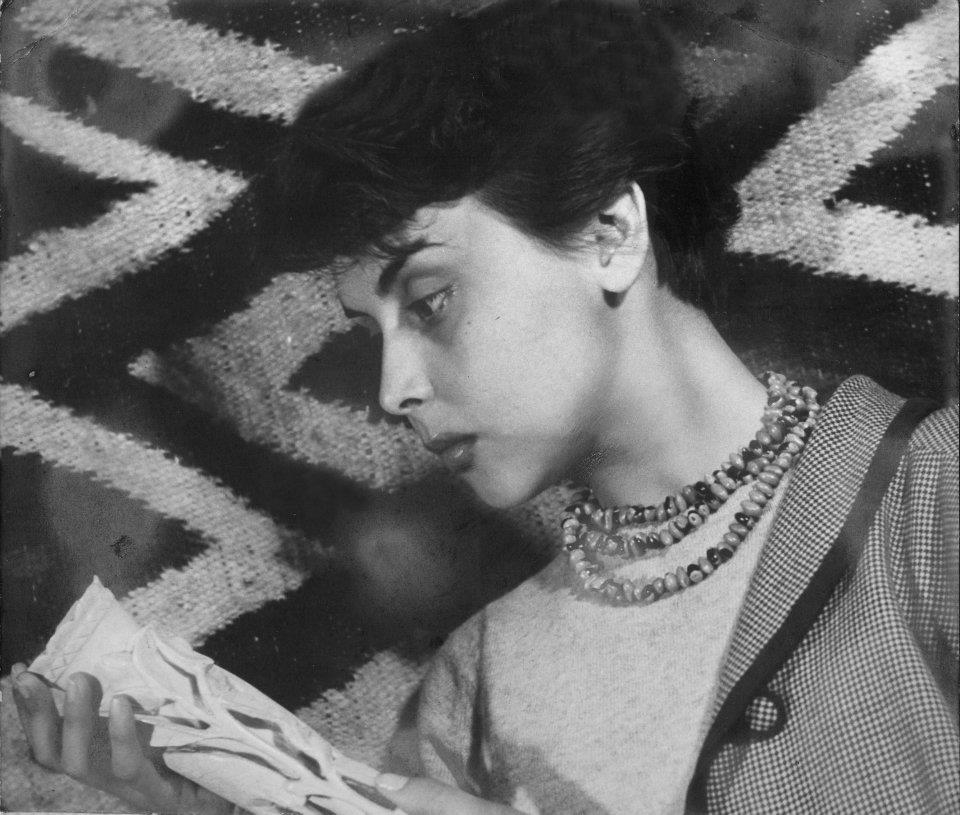 She was born on 10 August 1926 in Cercado de Lima. Daughter of Ermelinda Gonzales Castro and Alberto Varela Orbegoso, she grew up in Santa Beatriz neighbourhood and during her school years, she studied at the Colegio Antonio Raimondi and at the Institución Educativa Emblemática Rosa de Santa María. Later she entered the Universidad Nacional Mayor de San Marcos to study Literature and Education. Between the neighbourhood and the university she met intellectuals of his generation, among them Sebastian Salazar Bondy, Raúl Deustua, Jorge Eduardo Eielson, Javier Sologuren, César Moro, Francisco Bendezú, Corpus Barga, Judith and Emilio Adolfo Westphalen, Fernando de Szyszlo, José María Arguedas, Julia Codesido, among others, and with some of them he used to spend holidays in the house of the Bustamante sisters in Puerto Supe.

At the age of 23, she married the painter Fernando de Szyszlo, with whom she had two sons: Vicente and Lorenzo. On the same day as the ceremony, both departed for Europe on the ship Reina de Pacífico. They lived in Paris where they met Octavio Paz, who became interested in the poems of Blanca Varela published in Las Moradas. To this friendship were added Julio Cortázar, Ernesto Cardenal, Rufino Tamayo and other intellectuals and artists of the time.

In 1959, she visited Mexico, where she published his first book of poetry Ese puerto existe, edited with the Universidad Veracruzana, with the prologue of Octavio Paz. After visiting several European countries and living for a time in the United States, he returned to Peru in 1962. Varela participated in a television program recommending films and books; she also collaborated for the newspaper La Prensa. In 1964, she published his second book Luz de día under the published label Rama Florida.

Between 1963 and 1965, she worked in translation and cultural journalist for the magazines Oiga and Caretas. Later she served on the editorial committee of the magazine Amaru of Emilio Adolfo Westphalen. In 1972, the Instituto Nacional de Cultura published his third book of poems Valses y otras falsas confesiones (Valses and other false confessions). Then came the edition of the fourth poetry collection, Canto Villano, in 1978. During those years he worked at the Fondo de Cultura Económica, where he promoted the “Piedra del Sol” and “Encuentros” collections, and managed to publish Peruvian writers such as Luis Loayza, Anibal Quijano, Felipe Guamán Poma de Ayala, Pilar Dughi, Ana María Gazzolo, Carmen Ollé, Doris Morimisato, Marcela Robles, Rocio Silva-Santisteban, Alberto Flores Galindo, Marío Vargas Llosa and José María Arguedas.

About the author
The desperate dialogue of Blanca Varela
Giovanna Pollarolo

First there was, Este puerto existe (This port exists). The beautiful young poet Blanca Varela had just married the painter Fernando De Szyszlo and embarked on the mythical journey to Paris. They were then, as she herself has said, “jóvenes provincianos, atemorizados por las luces de la gran ciudad” (“provincial youth, frightened by the lights of the big city”). They arrived “muy desconcentrados, con más ilusiones que dinero” (“very bewildered, with more illusions than money”); they sought “a través del arte, de la poesía, una nueva manera de ser y de estar en ese mundo “moderno” [en el] que teníamos que aprender a vivir” (“through art, through poetry, a new way of being and being in this “modern” world [in the] that we had to learn to live”). It was post-war Paris, full of deprivation but also full of light. There the young couple met Octavio Paz: “Without exaggeration, Paz was our Virgil in that infernal and at the same time celestial jungle that it was the Paris of then”.  The links with Latin American artists: Julio Cortázar, the poet Carlos Martínez Rivas, among others. “Octavio also took us to the banks of another river, which was not the Seine, which seemed sleepy, but where it roared, magical, as always surrealism”. First with De Szyszlo and then alone, Blanca remained in Paris for almost a decade: she met André Breton, Jean Paul Sartre, Simone de Beauvoir, Michaux, Giacometti, and Léger: “It was a happy and unfortunate time at the same time. It was hard that learning life, in which we try to become people, real beings”. It was, in short, the time and place where Blanca Varela chose poetry as her “inevitable and painful trade”.

In addition, it was precisely Octavio Paz who in 1959, ten years after the beginning of the Parisian experience, made him the “best gift I have ever received”. He asked him for his poems and published them under the title Este puerto existe y otros poemas (Xalapa, Universidad Veracruzana, 1959). Originally, it was to be called Puerto Supe, the name of the beach on the north coast of Peru where Blanca spent some summers of her childhood; others, in the small beach house inhabited by José María Arguedas and the Bustamante sisters. Octavio Paz told her it was a very ugly title. Blanca replied: “But Octavio, that port exists” and he replied: “That is the title”. This is how “the solo singing of a Peruvian girl” came to light, as Paz described the poetry of Blanca Varela in the prologue hat she wrote “to my surprise, without my having asked her”.

Blanca returns to Peru, then lives for a while in Washington, in Ithaca (New York) and finally settles in Lima. In 1963 she published Luz de día (Daylight); in 1971, Valses y otras falsas confesiones (Waltzes and other false confessions); Canto villano (Villain song) in 1978. All in small editions, always at the insistence of friends who almost forced her to hand over her texts. She learned from her teachers César Moro and Emilio Adolfo Westphalen “that silence also nourishes poetry”.

Fondo de Cultura Económica (Mexico) gathers in 1986, under the title of Canto Villano all the poems that were dispersed; and in 1996, an expanded edition appeared with two new books that the poet had written: Ejercicios materiales (Materials exercises) and El Libro de Barro (The Book of Mud). Concierto animal (Animal concert) is published in Peru in 1999, and in 2000, Círculo de Lectores (Circle of Readers) published Donde todo termina abre las alas (Where everything ends opens the wings), which includes all the books and closes with El falso teclado (The False keyboard), the most recent series of poems, until then unpublished.

There is my childhood on this coast
under the sky so high,
sky like no other, sky, swift shadow,
clouds of fright, dark whirlwind of wings,
blue houses on the horizon.

By the great windowless dwelling,
by the blind cows,
by the murky liquor and the carnivorous bird.

Oh, sea of every day,
mountain sea,
rainy mouth of the cold coast!

There I destroy with shining stones
the house of my parents,
there destroy the cage of small birds,
I uncork the bottles and a black smoke escapes
And gently dyes the air and its gardens.

My hours are by the dry river,
Between the dust and its beating leaves,
in the burning eyes of this land
where the sea throws its white dart.
One station, one time
of dripping fingers and fish breath.
A long night in the sand.

I love the coast, that dead mirror
where the air spins like crazy,
that wave of fire sweeping through the corridors,
shadow circles and perfect crystals.

Here on the coast I climb a black well,
I go from the night to night deep,
I go to the wind that runs
blind, luminous and empty pupils,
or I inhabit the interior of a dead fruit,
that suffocating silk, that heavy space
populated with water and pale corollas.

On this coast I am the one who wakes
Between the foliage of brow wings,
who occupies that empty branch,
who doesn’t want to see the night.

Here on the coast I have roots,
imperfect hands,
a burning bed where I cry alone.

let’s say you won the race
and that the prize
was another career
that you did not drink the wine of victory
but your own salt
that you never heard cheers
but barking of dogs
and that your shadow
your own shadow
was your only
and disloyal competitor.

it was no man’s land and no man’s flesh

was a girl an animal an idea?

ah sir
what horrible pain in the eyes
what bitter water in the mouth
of that intolerable noon
in that faster slower
older and darker than death
by my side
crowned with flies
life passed.